I’ve been looking forward to writing about radio and TV at McMurdo Station. Anyone who knows me reasonably well knows that non-commercial radio is one of my “things,” and any kind of unusual/new-to-me broadcasting will attract my attention.

McMurdo Station has not disappointed.

Radio and TV channels are provided by the American Forces Radio and Television Service, or AFRTS (the acronym is pronounced. “A Farts”). As the name suggests, AFRTS provides American and foreign TV channels to members of the U.S. military stationed abroad. Although McMurdo Station is not a military base, a lot of its operations and logistical support are provided by the U.S. Air Force and the Navy, so we are eligible for AFRTS programming.

There are 20 TV channels at McMurdo, although at any given time, a few of them are off-air due to satellite issues. Some of the channels air programming from major US networks like Fox news and MSNBC, we get some sports programming from ESPN, and we also get some foreign TV channels like Air ANG from South Korea and New Zealand’s national broadcaster, the name of which is currently escaping me. One time Gina and I were watching “Animal Planet” and didn’t realize we were watching Air ANG until we were interrupted by a bunch of South Korean commercials.

As well as network TV channels, there are movie channels. There are two channels that play six or so movies a day, and another channel, the “all-day” movie channel, that plays the same movie over and over in a 24-hour period. So if you turn on the TV and “Snatched” with Amy Schumer or “A Muppet’s Christmas” is half-over, just wait an hour and tune in at the beginning of the movie.

Finally, there are a few channels that play slides that show flyers for upcoming events at McMurdo, as well as fixed wing and helicopter schedules, and PSAs like helicopter safety reminders, emergency numbers, and the daily menu for the galley.

I often chuckle while flipping through the channels because McMurdo’s three radio streams are played on the same channels as the McMurdo event/PSA channels. So you can check out the latest helicopter schedule or this week’s restorative yoga schedule with heavy metal from Ice Radio playing in the background. It’s a hilarious combination of audio and visual media.

Channel 9 plays episodes of Star Trek: The Next Generation every weekday at 5:44 pm. I was beginning to plan my day off schedule around that, but then I went on night shift.

The McMurdo store also has free DVD rental, which I’ve used a few times. All of the dorm lounges have a decent DVD and VHS collection. I always smile nostalgically when I see a movie on VHS that I want to watch. Takes me back to my childhood. I saw “UHF” with Weird Al Yankovic on VHS last week and seeing it on VHS made it that much better.

There are a three radio channels McMurdo receives. Two of them are rock, pop, and country music channels we receive from AFRTS, and one is Ice Radio 104.5, our local FM station. Ice Radio is like no radio station I have ever been involved with.

Within about 3/4 of a 24-hour period, Ice Radio plays automated pop, rock, and country music from AFRTS. For the remaining quarter of the day, programming is provided by volunteer DJs. There are currently about 20 regular shows, and another twenty DJs who are “floaters,” meaning they just drop in and do a show whenever the studio is available. I am a floater due to my work schedule, which changes every week.

The biggest difference between Ice Radio and all the other radio stations I’ve worked with is that DJs cannot play their own music. It’s an AFRTS rule. AFRTS sends Ice Radio several CDs a week, with each CD containing a compilation of a dozen or so songs. You can play songs from the CDs, the digital music collection, and the record collection.

Ice Radio’s record collection is pretty impressive. Peter Recjek, then-editor of The Antarctic Sun, did a nice article about the record collection in 2012, saying that “Rumor has it that at least part of the vinyl collection came from Vietnam, and that many of the records were played by none other than Adrian Cronauer on his radio show in Saigon in 1965-66. Cronauer was the music DJ who bucked the military brass, as portrayed by Robin Williams in the 1987 comedy ‘Good Morning, Vietnam.’ ”

The full article can be found here.

I willingly admit to being a world music snob who developed her music host chops playing Senegalese pop music and Mongolian heavy metal on community radio, so I haven’t spent as much time on Ice Radio as I thought I would. Fans of classic and Top-40 rock and country will not be disappointed, however. Nor will Millennials who have never been comfortable playing records, as they have the opportunity to learn this ancient, forgotten technology. I CAN FINALLY PLAY RECORDS LIKE THE COOL KIDS!

You can also do interviews on Ice Radio, which I am hoping to do in my remaining ten or so weeks here (!!!)

Anyone want to be interviewed on local radio in Antarctica? 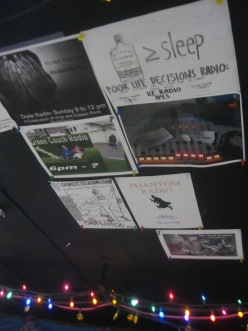 Posters from past shows on the ceiling.

You can read some fun facts by David Letterman on air. 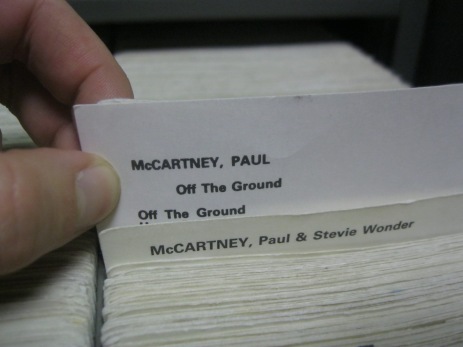 Looking up records the old-fashioned way! 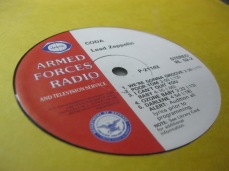 A record from AFRTS.

Show posters. I wish all radio stations had their DJs do this!

Star Trek on Channel 9 every day!

2 thoughts on “I Can Finally Play Records Like the Cool Kids: McMurdo Media”