Skuas are large seabirds found in polar regions. They are quite famous around McMurdo for being the only flight-capable species of birds in this part of the world, and also for being aggressive and all around badass. We even have a Powerpoint presentation in one of the safety folders at work about being safe around Skuas, as they will dive-bomb you if you walk around town with uncovered food.

The fact that they are untouchable makes them even more badass. I think they know we aren’t allowed to touch/harass them, per the Antarctic Treaty, and that makes them cocky. For example, we had a five-hour softball tournament on New Year’s Day (where I got sunburned and really drunk–worth it!) and every now and then a skua would fly low over the softball field, close enough to hit with the ball, and everyone would yell “SKUA!” and stop playing until the bird had flown out of harm’s way.

But a skua isn’t just a bird. It’s a way of life here.

Skua is the freestore/scavenging culture of McMurdo. We have a little building called Skua Central where people can take their unwanted clothes/shoes/books/electronics/vitamins/shampoo/tea/ramen/art supplies/puzzles/VHS exercise tapes/video games/bunny costumes/whatever else you don’t want anymore. There are also large boxes outside some of the dorms and little boxes in ALL the dorms where you can deposit skua items. These places usually have the best skua, because by the time it’s taken to Skua Central, it’s been picked over my scavengers like this moi.

Skua is so popular here, it’s used as a verb.

One time I opened the skua cabinet in dorm 201 and found a mountain of ramen, two cans of beer nuts, a 30-pack of hot chocolate mix, and an unopened box of What Thins, which were only a little expired (we have snacks down here that are six years past their expiration date). Gina and I had a feast. Wheat Thins are like gold here. I couldn’t believe someone had given up a whole box of Wheat Thins.

I myself  have picked up several shirts, two pairs of jeans, a pair of steel-toed work boots which now have purple flames painted on the toes, some really nice pillowcases, a huge towel, and several really high-quality leather work gloves. So much for thinking I would come home with less than I left with. 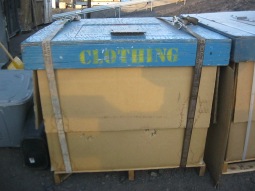 One thought on “Who Skuas Wheat Thins?”